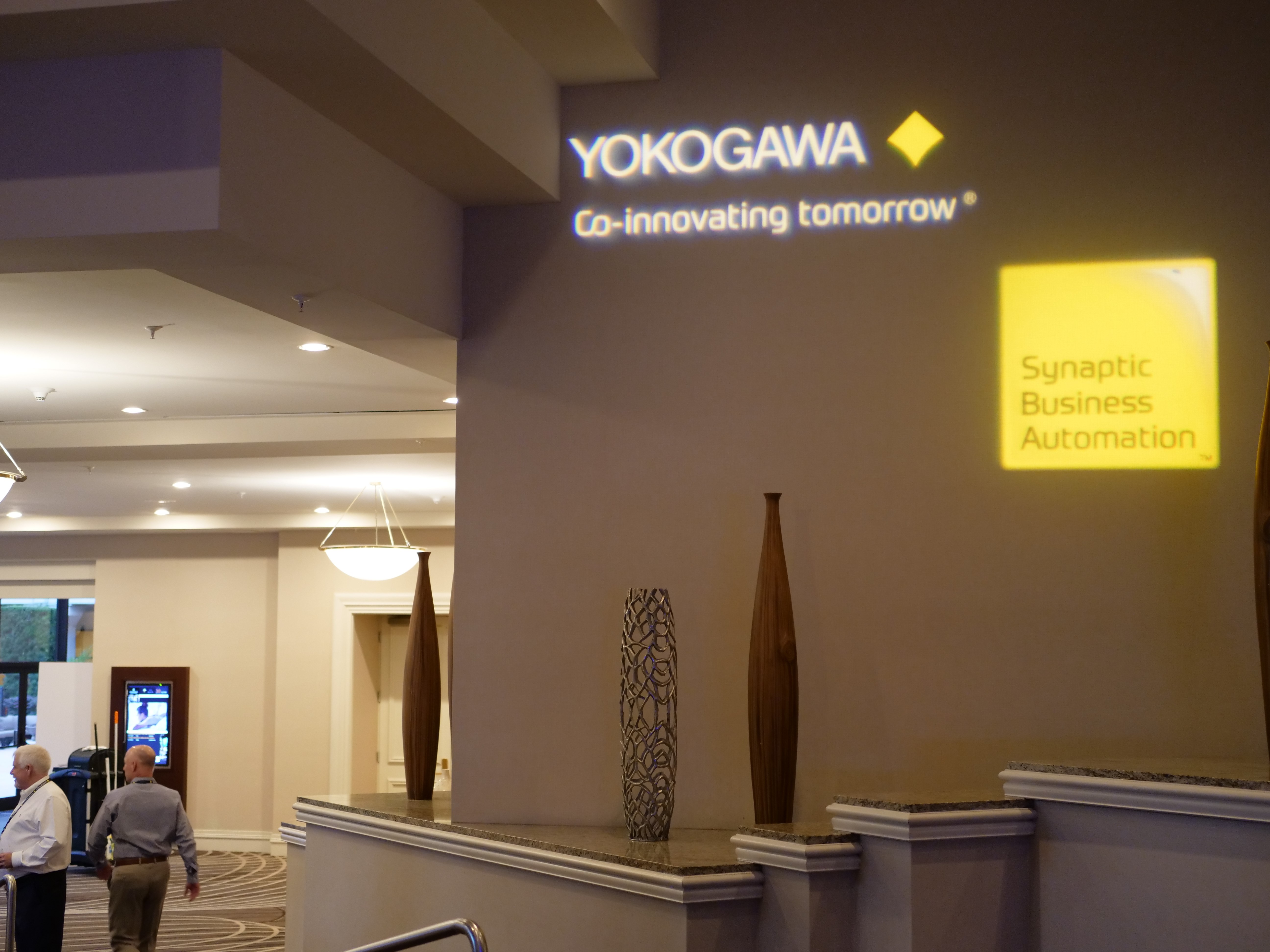 Joseph Ting - YokogawaThe Yokogawa Conference and Exhibition – North America is vital for Yokogawa because it provides a means to present Yokogawa's direction in industrial automation as well as gather feedback from our users for our products and services so that we can improve our ability to exceed their expectations,” said Joseph Ting, Director of Marketing and Lead for the conference organizing team. “Our users see it as a way to learn about complementary solutions and what’s new that will be coming in the near future as well as to network with each other and share common interests. They provide invaluable feedback for product enhancements that will satisfy their business needs and help in prioritizing those improvements for the U.S. market.”

The conference was aligned around the theme of Synaptic Business Automation utilizing Yokogawa OpreX solutions; OpreX Transformation, OpreX Measurement, OpreX Control, OpreX Lifecycle, and OpreX Execution.   The OpreX brand name stands for excellence in the technology and solutions that Yokogawa cultivates through the co-creation of value with its customers, and encompasses the entire range of Yokogawa’s Industrial Automation products, services, and solutions.

The conference actEually started with a set of pre-event sessions highlighting trends in Automation, Digitization, and Cyber Security within the automation industry.  Included were seminars on Trends in IIoT Communication Platforms, Digital Transformation in the Process Industries, Distributed Ledger Technology, Blockchain in the Process Industries, and Trends in Industrial Automation and Control Systems Security all led by Yokogawa industry experts. 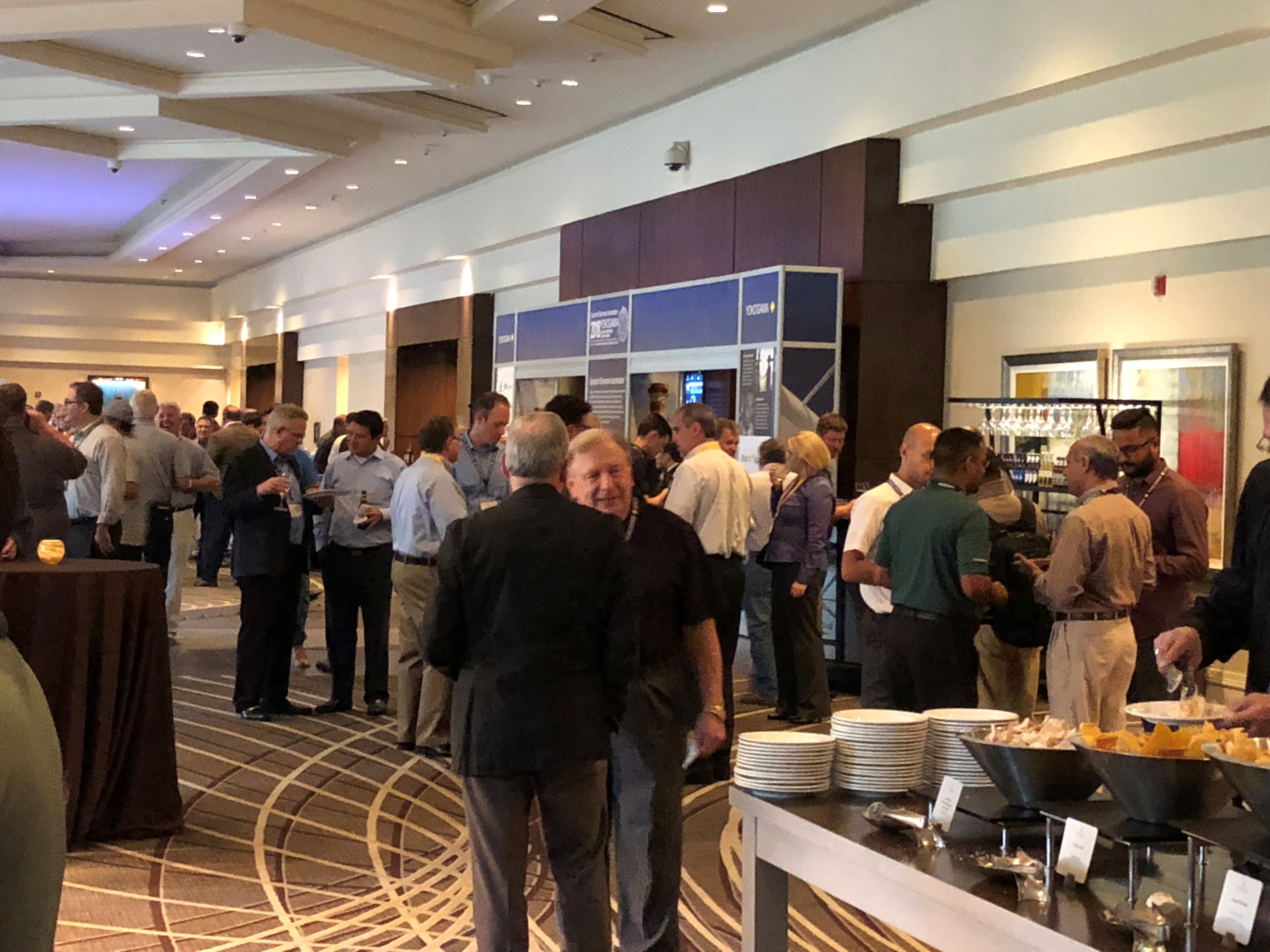 Evening ReceptionLater that evening a reception welcomed the participants.

Riley Parker - Shell E&Pwith a welcome remembrance and safety moment by Riley Parker, Shell Exploration and Production and Chairman of the Users Group Steering Committee.   He was followed with greetings by Shuji Mori, CEO and President of Yokogawa Corporation of America.  Joseph Ting, Director Marketing, and Eugene Spiropoulos, Systems Consulting Manager, then updated attendees on the agenda and general information about the conference and exhibition. 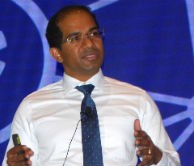 &Sullivan, provided the  lead-off keynote address   describing the  imminent shift, a mega-trend in business models, at least among those solution providers who will most benefit from digital  transformation in his talk “#ShiftHappens: Industry, Competition, and Customers”, whereby emergence of new business models is the most important outcome of digital transformation and a shift to the outcomes-as-a-service approach. Ram cited five key technology transformations that will enable this smart future: intelligent sensors; smart gateways; TSN/IP low-latency, highly deterministic networking; advanced analytics and digital platforms upon which are built industrial applications. 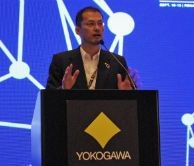 Shigeyoshi Uehara - Yokogawafor Yokogawa Electric Corporation who discussed Yokogawa’s Vision and Direction.  His key message was Yokogawa’s transformation from an automation solution provider to a trusted partner.  Though acquisition and development, Uehara-san described how Yokogawa now offers a full portfolio of solutions along the IT/OT spectrum: from field instruments and analyzers to distributed control and safety instrument systems on the OT side, to new IIoT sensors, edge/fog computing solutions, energy management and simulation on the IT/IIoT side, brought together with strategic consulting, process analysis with machine learning, and profit-driven operations expertise.

Following Uehara-san, Kenney McNabb, previously of Eastman Chemicals and now McNabb Ventures  and Don Salyer, Eastman Chemicals provided an end user view of Programs vs Projects, describing a shift away from an incremental upgrade strategy to a DCS modernization program to better understand total cost of ownership of an automation system and to better respond to the product trends of obsolescence and high annual costs.

Following a break, the attendees were able to choose between 6 parallel sessions that included Cyber Security, Lifecycle Solutions, Wireless, DCS and SIS System updates, Advanced Solutions, and, in the KBC Xchange, Digital Transformation.

Following lunch a plenary session for all attendees was held on digital transformation with Mark Routt, KBC (a Yokogawa Company), setting the stage on digitalization with his talk of “Digitalization: Critical to Future Global Energy Needs”, followed by ARC analyst Peter Reynold’s presentation on “Why Do Operations Need a Digital Transformation” and concluding with an end user story by Arnold “Marty” Martin, Air Liquide on “Leveraging Digitalization for Transformational Change”.

After break, another set of 6 breakouts were held including more Cyber Security and Wireless, SCADA and Information Management Systems, Gas Processing industry session, customer advanced solution stories and more Digital Transformation instruction by KBC, and their users and partners.

After the breakout sessions concluded for the day, the OpreX Showcase and Exhibition was opened 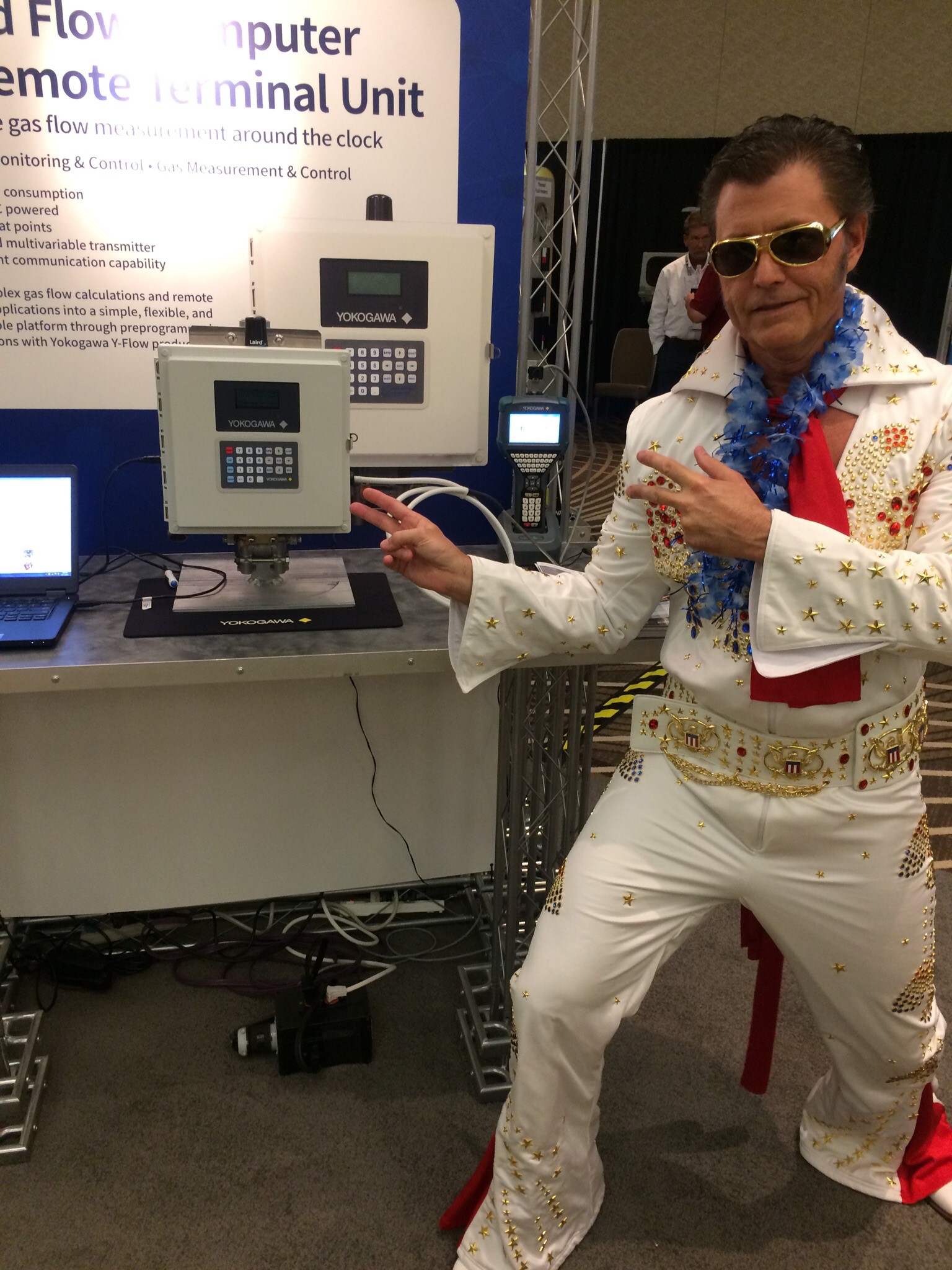 Yokogawa's Elvis for “Drinks, Demos & Discussions”.  All were invited to play OpreX bingo where participants found their numbers by attending the partner booths in order to score a “bingo” and win prizes.  Yokogawa Gold and Silver partners also had floor time to pitch how they augment Yokogawa solutions to the participants.  A special appearance was made by “Elvis” to highlight the session. 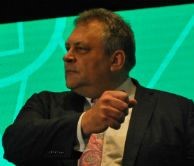 Jeff Warman - Monroe EnergyThe opening keynote was given by Jeff Warmann, CEO of Monroe Energy entitled “Driving Excellence in the Face of Many Disruptive Forces”, who talked about key factors in decision making of political, people, process and technology.  Monroe Energy owns the Trainor refinery whose function is to ensure jet fuel for its parent company Delta Airlines.  Featuring “Wellhead to Wing” as a catch phrase Mr. Warmann noted the Yokogawa/KBC solutions of production accounting, supply chain scheduling and real time energy optimization and simulation as key technologies.  He also unveiled some “Cool Stuff” such as use of drones, remote access and surveillance, virtual reality training and mobility tools to enable decision making. 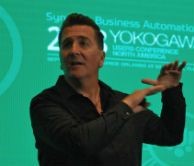 The featured keynote was Adam Steltzner whose talk “The Right Kind of Crazy: A True Story of Teamwork, Leadership and High Stakes Innovation” utilized the MARS curiosity project to highlight creative problem-solving, not to have an over-reliance on models and simulation, as they are susceptible to the sin of omission—and using a risk list to rank worrisome project elements.  An entertaining presentation was featured with elements of footage of Curiosities’ Mars landing in 2012. 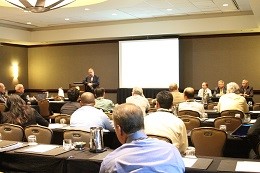 The Users then held a “User Only” session and discussed Yokogawa’s performance toward user requests from previous user group meetings as well as prioritizing new items.  New steering committee members were elected to represent user interests and support for the future conference and were announced at Thursday’s closing lunch. 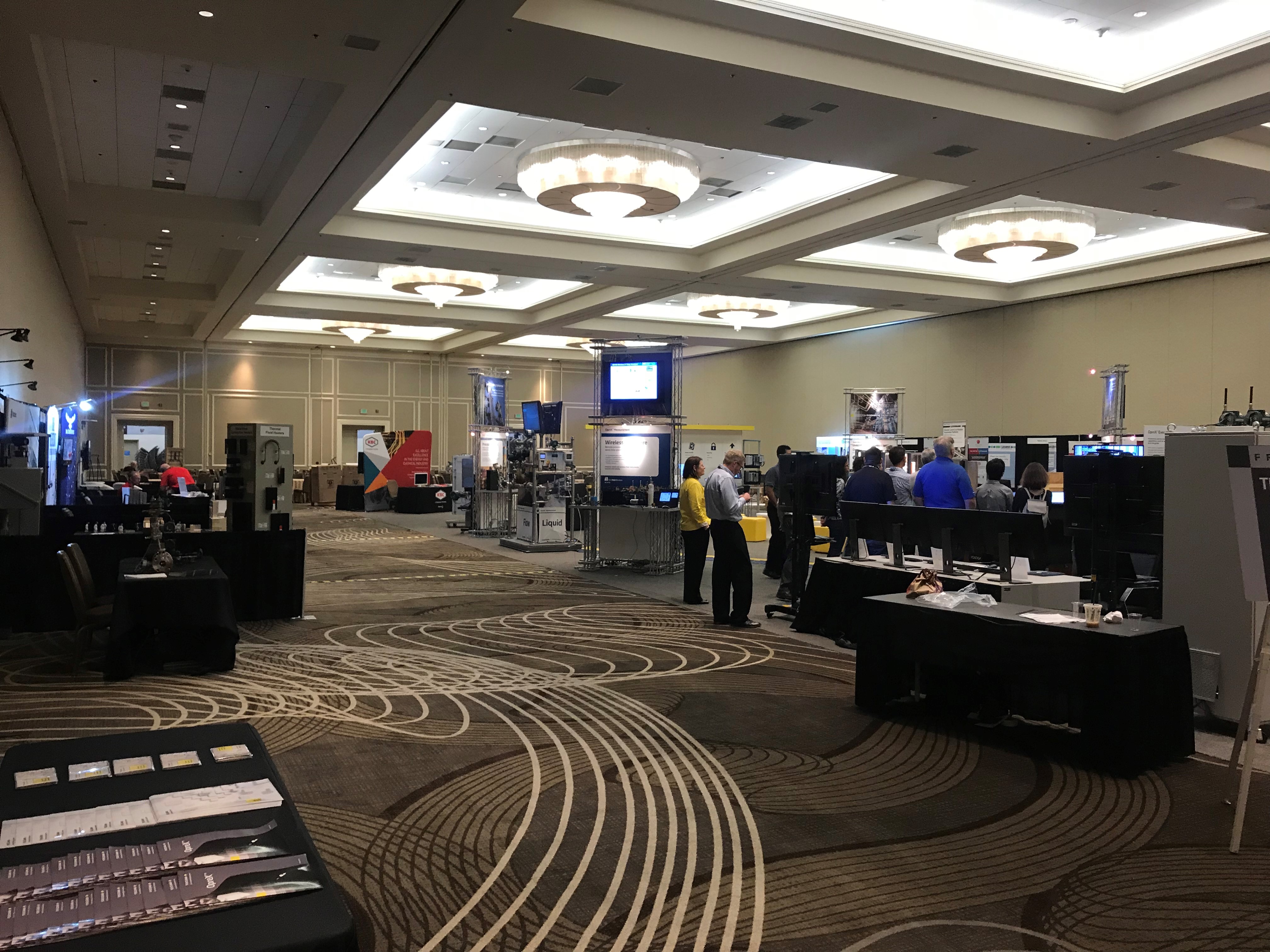 Exhiibtionto allow users an opportunity to discuss their automation situations with experts and to see the latest products from Yokogawa and their solution partners.  The booth was laid out according the five OpreX pillars, Measure, Control, Transformation  (ie Optimize and Improve), Execution, and Lifecycle. 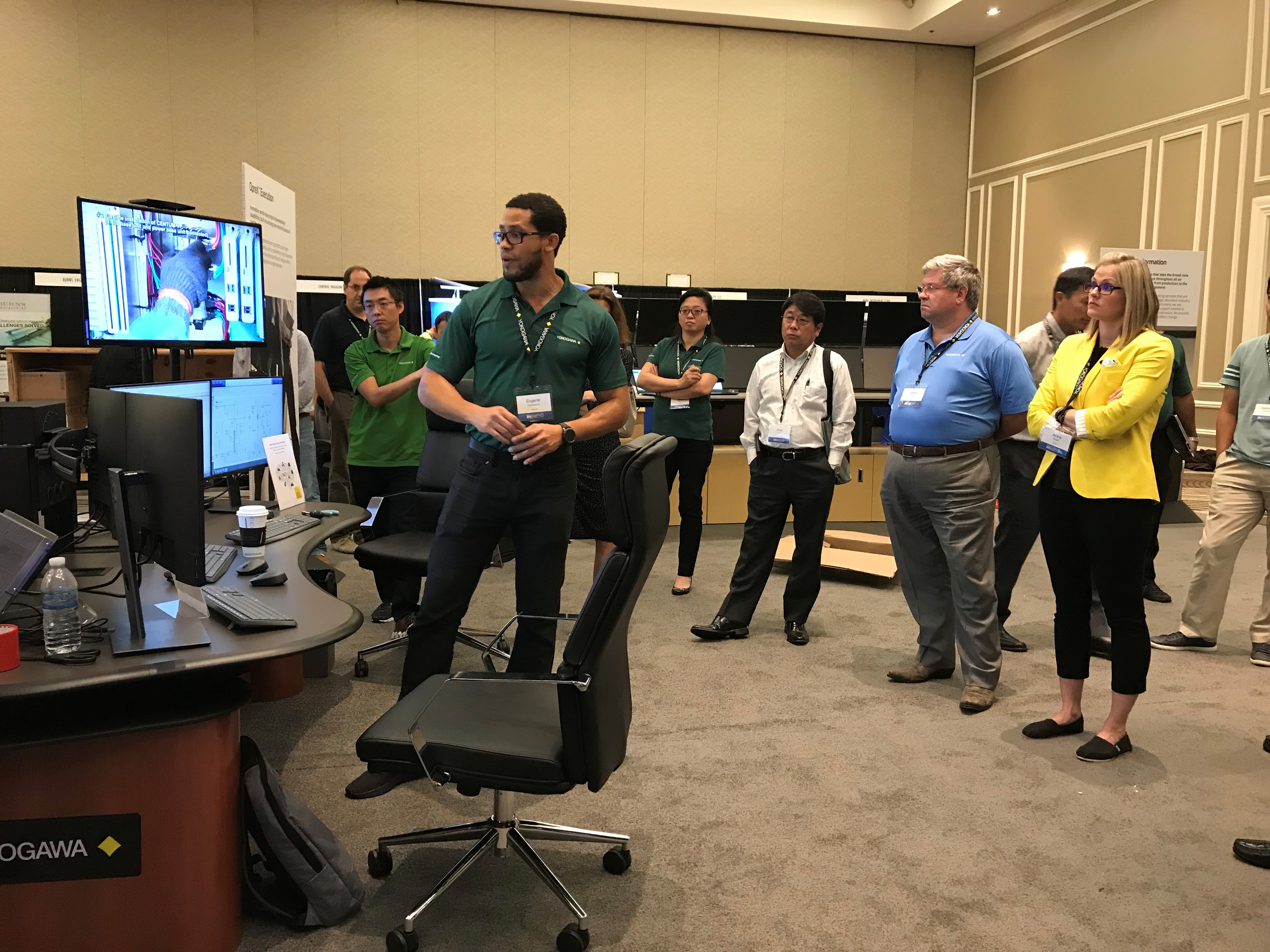 OpreX Execution featured APEX (Agile Project EXecution enablers of fieldmate validator, PRM and PRM commissioning support tools along with future technologies; one of which soon to be released, Model Broker, a dynamic model for simulation.

Throughout the OpreX Showcase and Exhibition were Yokogawa subject matter experts who were readily identifiable with their green shirts.

Wednesday evening culminated in a fun night of entertainment and networking at SeaWorld’s Discovery Cove with dinner, music and a beach luau. 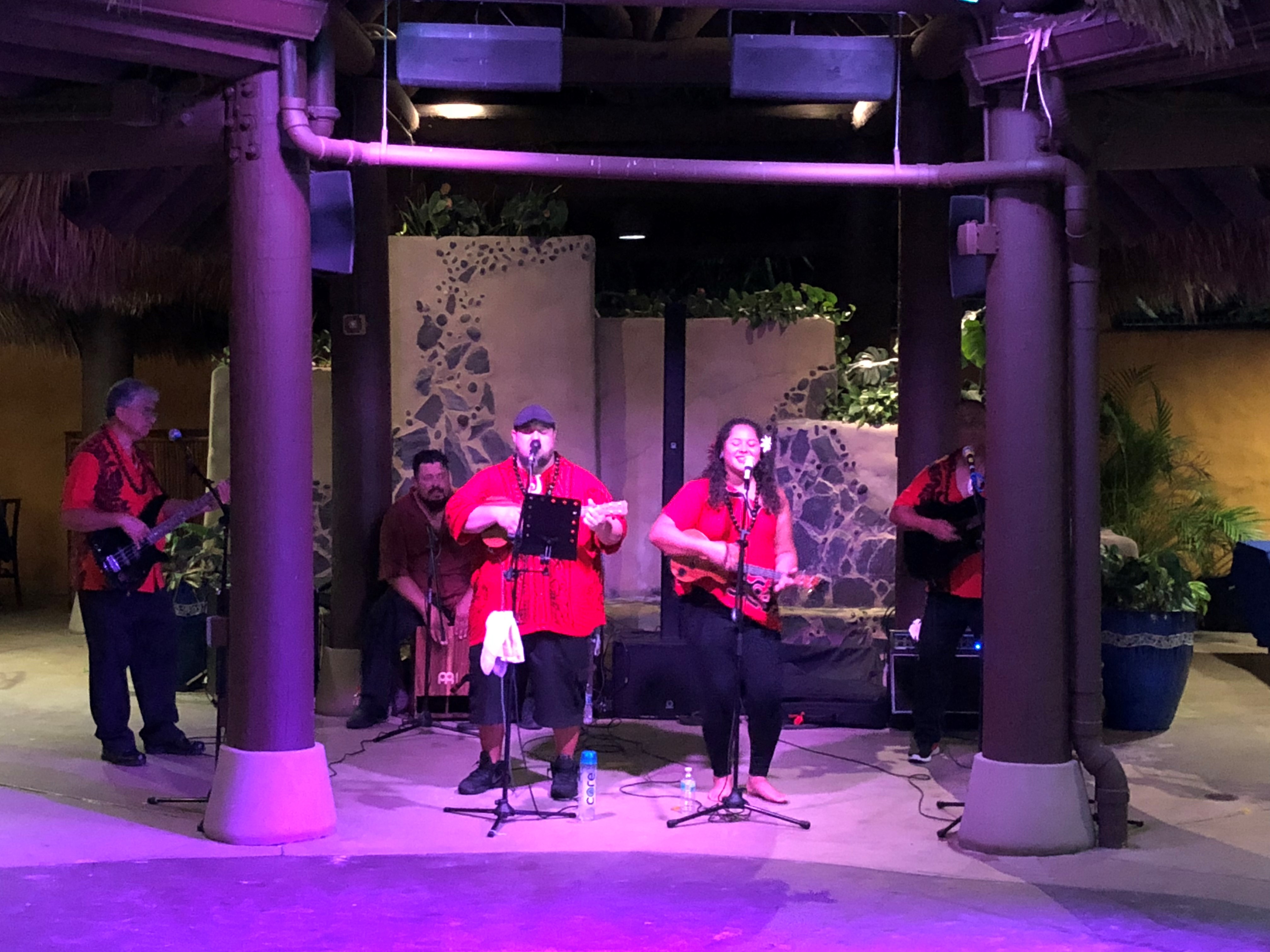 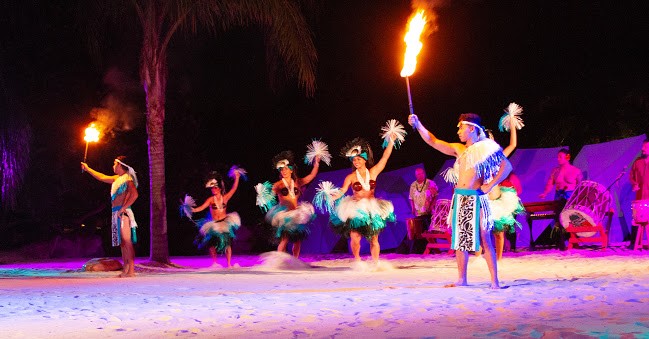 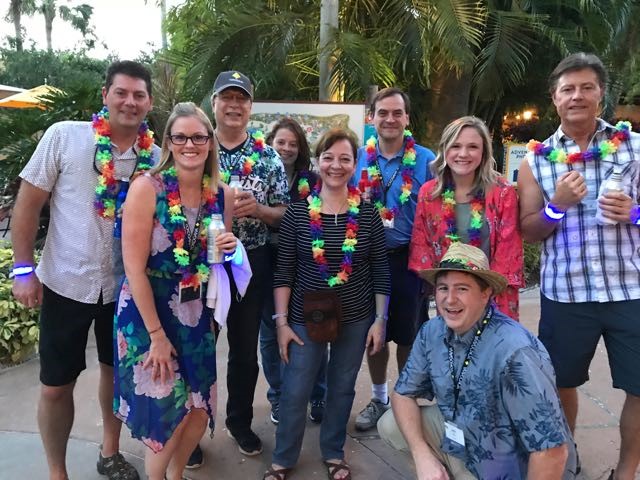 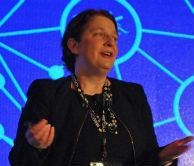 Helen Dotson -    Dow ChemicalsAutomation Technology Leader for Dow Chemical, spoke on “Bridging the Gap - Are You Receiving an Adequate Return on Your Automation Investment?” Dotson described the process and decisions made in the upgrade of the Yokogawa’s CENTUM XL DCS to CENTUM VP in the aftermath of the 2011 tsunami that devastated its plant in Soma Japan.  Dotson emphasize that human elements were critical to success that included to respectfully address the cultural divides, plan ahead to maximize value, plan for long-term success and manage change effectively. 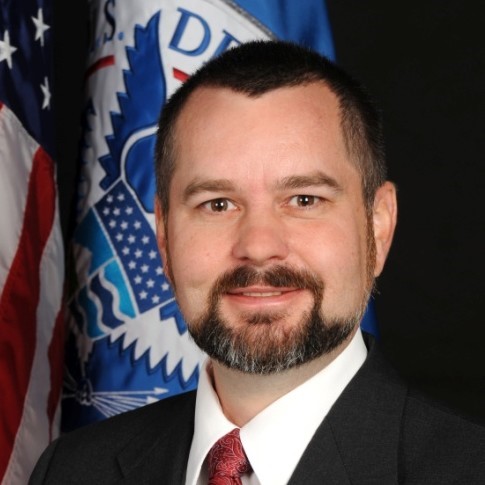 Marty Edwards - Automation FederationMarty Edwards, Director of Cybersecurity at the Automation Foundation and previous director of the Department of Homeland Securities (DHS) Industrial Control Systems – Computer Emergency Response Team (ICS-CERT) followed with cybersecurity topic of “Think Like a Hacker…. But Act like an Engineer” emphasizing to prioritize the “most important” business or safety function, thoroughly mapped ALL systems that impact that function and completely understand all potential areas of weakness / vulnerability to mitigate those areas.

The conference concluded with a lunch whereby several awards were presented.  First, Keith Larson, publisher and vice-president of Control Magazine presented Control’s Process Control Hall of Fame award to Herman Storey, retired Shell and consultant to Yokogawa.  Previous Hall of Fame inductees from Yokogawa have included Yutaka Wakasa, “The DCS Pioneer” in 2010, Maurice Wilkins, “The Batch Wizard” in 2011, and Dave Emerson, “The Standards Bearer” in 2014.

The best presentation of the user sessions was declared a tie between Amit Ajmeri of CPChem for his presentation “Effective Use of an Asset Management System” and Shannon Vasseur, Williams Energy and Dr. Bob Rice of Control Station, Inc. on their presentation “Intuitive 6-Step PID Tuning Procedure Enables Williams Energy to Optimize Critical Controllers.”

The session culminated with the presentation of Yokogawa’s Co-Innovation Award.  The intent of the Co-Innovation Award, which replaced the previously named Technology Award, is to recognize where the theme of “Co-innovating tomorrow” is being put into practice with customers and partners.  The 2018 winner was selected from qualifying entrants that have worked with Yokogawa Corporation of America to develop specific technologies, or applied Yokogawa products in specific new applications within United States, Canada and Mexico.

Eastman Chemicals was awarded the 2018 Co-Innovation Award winner for co-development of the Yokogawa Interlock Safety Monitor.   Eastman along with Yokogawa Marex Software Development Group created a software application to monitor all safety loops in the process.

Coverage of the event was provided by Control Magazine.   Their write-up of the three days can be viewed at
https://www.controlglobal.com/industrynews/2018/live-from-the-2018-yokogawa-user-group/

In addition, a video summary is posted on YouTube at
https://youtu.be/CcTftTJoGW8